I took over as Chairman on 1 January, so this report covers the six months of 2009 when Julian Lush was acting as chairman. I would like to thank him on your behalf for all that he did, and record once again our appreciation for Victor Henderson's period as chairman.

It has been an eventful year for Yemen and British-Yemeni relations. Apart from the failed attempt to assassinate our honorary president, Tim Torlot, the unsuccessful attack on a US airliner in December by a young man who had travelled from Yemen, suddenly turned the world's attention to Yemen's problems, mobilising the energies of countless journalists and creating a number of instant 'experts' on the country. Although the attention initially focussed on the presence of al-Qa'ida in the Arabian Peninsula (AQAP), it was soon evident that Yemen faced a series of major challenges, of which AQAP was just one manifestation, and that it was essential to help the Yemeni government meet and overcome these problems . A conference was held in London in January 2010 which led to the formation of the 'Friends of Yemen' and other bodies to work with and in support of the Yemeni government. It was good to see the British government taking a role in this, building on the considerable involvement of DfID in the country. Despite justifiable concerns about AQAP, we must not lose sight of the fact that AQAP is not the most serious of the challenges facing a government which, for example must create jobs and provide services for its rapidly expanding population located in some 120, 000 settlements in often difficult terrain.

Inevitably, members of the Society have been involved in helping the media understand Yemen and taking part in conferences on the country -I have attended six since January. Stephen Day, a former chairman, has appeared in the press and on TV. Ginny Hill, a member of the Society's Committee, spoke at a meeting at Portcullis House arranged by CAABU and has been much in demand on TV channels. Victoria Clark has also been in demand after the publication of her widely acclaimed book: Yemen: Dancing on the Heads of Snakes; and for a time our secretary, Rebecca, was besieged by calls from the world's media. Meanwhile, Chatham House has launched a Yemen Forum and initiated a study programme, under Ginny Hill, on Yemen and its regional relations, which brings together much of the considerable expertise on Yemen existing in the UK.

Not all media coverage of Yemen was on current affairs. BBC Radio 4's 'Document' series discussed British involvement in the 1960s. There was 'The Frankincense Trail' with Kate Humble on TV, and the British Museum's 'A History of the World in 100 objects' on BBC Radio 4 included a pre-Islamic bronze artefact from Yemen.

I am not going to dwell long on the FCO's travel advice for Yemen which has featured in most recent annual reports. Travelling to and around the country can be difficult but a group of Society members made a most rewarding visit to Soqotra in January, and I myself spent ten days in Sana'a and Aden last month without any problems or the feeling of being under threat. But it seems unlikely that British travel advice will change in the near future.

We have also seen during the past year the start of what may prove to be a spate of books on Yemen. Those by Society members include:

Roads to Nowhere by John Harding
Warriors of Arabia by Franco Grima
Yemen: Dancing on the Heads of Snakes by Victoria Clark
Britain's First Muslims: Portrait of an Arab Community by Professor Fred Halliday
Other books are due to appear in 2011. Members of the Society have also been active in the cultural field: Gillian Hills has again exhibited some of her Yemen-inspired mosaics at the Chalk Gallery, Lewes. We reproduced one of these in last year's Journal. And Tasleem Mulhall has just had her first exhibition in Isleworth.

There was also a 'Yemeni Showcase' of rare maps, photographs and other documentary material at the Royal Geographical Society. And thanks to the generous sponsorship of Shaikh Tariq Abdullah, Chairman of the English-Speaking Union (ESU) Branch in Yemen, two young Yemenis visited London in May to compete in the ESU's annual international debating competition at Dartmouth House. I should also like to mention that the Arab-British Centre's Culture and Society Award for 2010 was given to the Liverpool Arabic Arts Festival in which the Yemeni community play an active part. 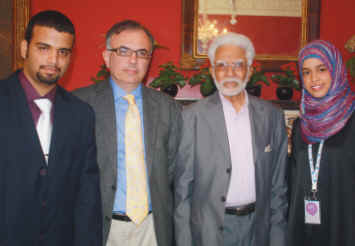 Yemen was represented this year at the English-Speaking Union’s annual International Public Speaking Competition for young people by Noha Sultan Mohamed and Nawaf Mahmood Abdullah. They are pictured here at the ESU’s headquarters, Dartmouth House, London on 21st May with Shaikh Tariq Abdullah, the ESU’s representative in Yemen, and his assistant, Roger Stokes, who accompanied them from Aden to London.

We announced last year that we aimed to encourage further discussion and study of Yemen - especially important in the current climate. We accordingly revived our long discontinued annual essay competition and implemented a research grant. First prize (£500) for the essay was awarded to Shuaib Almosawa for his Yemen's Abandoned Children, and second prize (£250) to Muhammad Awadh al-Aulaqi for his Thoughts from Yemen. Shuaib's essay will be published in the Journal. This year's academic grant (£500) has been awarded to Thanos Petouris for fieldwork towards his PhD thesis: The Anti-Colonial Movement in Aden and the Protectorates of South Arabia 1937-1967.

Notices for this year's competition were issued recently, and I would ask members to spread the word and encourage as many entries as possible.

We have held the following events:

September 2009: Captain Roy Facey, Adviser to the Yemen Ports Authority (and now Honorary British Consul in Aden), spoke at the Middle East Association (MEA) on developments in Yemen since his last presentation there in January 2008.

October 2009: Sarah White gave us her personal impressions of life in Yemen during her three years in Sana'a as Df ID's country representative.

December 2009: British surgeon David Nott gave an illustrated talk about his recent spell of voluntary service in the Yemeni highlands.

February 2010: An impromptu and lively discussion at the MEA in lieu of a film screening which had to be cancelled due to equipment failure. This proved a welcome opportunity for members to meet and compare notes in an informal atmosphere.

April 2010: In the absence of Victoria Clark who had been due to speak about her new book but had been called away to the US, I gave a talk on the People's Republic of South Yemen which took power when South Arabia achieved independence from British rule in November 1967.

May 2010: David Gwynne-James discussed the subject of his recently published monograph: Arabian Peninsula - An Account of Operations in the Dhala Region April 19–June 2 1958.

The Society donated £1,500 during the year to thee following causes: £500 to Dr Nizar Ghanem for the Health and Culture Centre in Sana'a; £500 to SOAS in support of its Yemen Death and Burial Conference; £500 to th Yemen Women's Union for water tanks in the Sa'ada region.

We are delighted to welcome 14 new members to the Society since last year but much regret to report the deaths of the following members: Derek Mathews, Christopher Gandy, Ronald Bailey and Professor Fred Halliday. Fred Halliday has long been the premier scholar on the People's Republic of Democratic Yemen (PDRY). The Society was well represented at the moving event held at Senate House to honour his life and legacy. We also regret to note the death on 16 June at the age of 101 of the renowned Italian soldier and diplomat, Amedeo Guillet, who was the subject of an article in the Journal in 2008.

Finally, I would like to thank HE Mohamed Taha for his generous hospitality at the party which follows the AGM and for the unfailing support which he has given the Society since his arrival in London in 2005. Sadly, he will have left his post by the time this report is published. He will take with him our sincere good wishes for the future. I also wish to thank officers of the Society for the work they do: in particular John Mason for handling our finances so adroitly and for the time he has devoted to the funding of our charitable activities; and Rebecca Johnson for all she does to keep the show on the road, although due to other commitments she will be unable to continue indefinitely.

We have not had any nominations this year for new committee members but we would welcome volunteers especially anyone with the time and energy to organise more events for us. I would like to see us arrange a conference on Yemen in 2011 or 2012 but I and my colleagues will need help and we would welcome offers from members. 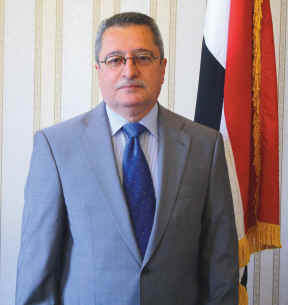 HE Mohamed Taha Mustafa served as Ambassador of the Republic of Yemen (and as Co-President of the British-Yemeni Society) from November 2005 until July 2010 when he and his family returned to Sana’a.