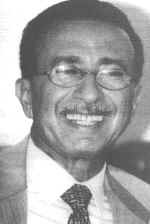 Yahya al-Mutawakkil, who was killed in a road accident between Lahej and Aden on 13 January 2003, was a leading figure in the Yemen Arab Republic established after the 1962 revolution in north Yemen, and was to play an important role in the merger of North and South Yemen in 1990.

He was born in the mountain fastness of Shahara, north-west of Sana’a, into a well-known family of sayyids. A famous ancestor was the 17th-century Zaydi Imam al-Mutawakkil Isma’il, hence the family name of al-Mutawakkil. He went to school in Shahara and later in al-Mahabisha (overlooking the Red Sea plain of Tihama) before moving to Sana’a in 1956 to complete his education. In 1958 he entered the Air Force College, then commanded by Abdullah al-Sallal who was to become the country’s first republican president. After graduating in 1961 as Lieutenant (parachutist), Yahya was attached to the Military College, Sana’a, as an instructor. Meanwhile, he had joined the clandestine Free Officers Association, whose aim was to overthrow the Imam’s regime, and took part in the country’s first demonstration, organised against the arrest of a fellow Free Officer.

On the night of the revolution of 26 September 1962, al-Mutawakkil, then 19, joined a group of artillery officers in deploying cannon to the Khuzayma cemetery to shell the palace of Imam Muhammad al-Badr. In 1963, during the civil war between the Egyptian-backed republicans and the royalists, Yahya was severely wounded in an engagement in north-west Yemen and flown to Egypt for treatment. Unfit to return to the battle-zone, he was sent to the Soviet Union for higher military studies, and in 1965 was appointed Director-General of Military Training, Sana’a. He became associated with a group of prominent Yemeni republicans, led by Qadhi Abd al-Rahman al-Iryani, Ahmad Muhammad Nu’man and Hassan al-Amri, who opposed the pro-Egyptian policies of President Abdullah al-Sallal and Egyptian control of Yemeni affairs. When the group, including Yahya, visited Cairo in August 1966 to remonstrate with the Egyptian government, they were thrown into prison and not released until October 1967; Yahya later described this period of incarceration as ‘a kind of slow death’.

Back in Yemen, he played a key part in the bloodless coup of 5 November 1967 which toppled the Sallal regime and installed al-Iryani as head of the Presidential Council. He was then appointed, in the rank of Brigadier-General, Deputy Commander of the Armed Forces with responsibility for finance and administration. Meanwhile, with Iryani, he worked unceasingly to set up the government of ‘national reconciliation’ which in 1970 brought an effective end to the civil war.

After a period in Cairo as ambassador, Yahya returned to Yemen following the June 1974 coup led by Ibrahim al-Hamdi. Appointed Minister of Interior, he banned detention without trial of political prisoners for more than 24 hours. In 1977 he served as ambassador in Washington and later in Paris. In 1985 he was made Governor of Ibb Province, and from 1993-1996 served once again as Minister of Interior. He worked hard to prevent the outbreak of civil war in 1994. The following year he was elected Assistant Secretary-General of the ruling General People’s Congress Party (GPC). Later, he was also appointed member of the Consultative Council, heading its political committee until his death.

Pragmatic and liberal in outlook, his personality and political skills won him widespread respect. Although a pillar of the ruling GPC, he maintained cordial relations with the Yemeni Socialist Party which had suffered severe setbacks in the mid-1990s. He is survived by his wife, the daughter of the eminent Zaydi scholar, Sayyid Muhammad al-Mansur, and two sons and one daughter. Another son, Ahmad, died in an accident last October.